Growing up, I was unable to talk. Speaking was difficult for me because of a severe stutter. Imagine being excited to share something with your friends, family, or bullies, but then your throat collapses in and completely locks. I knew exactly what I wanted to say—in fact, I had rehearsed it in my head multiple times—but I was often unable to and instead went silent.

My mind has always raced a million miles an hour, but without an outlet to communicate my thoughts, it made me quite introverted. My parents found out I had pretty much three interests as a kid: computers, sports, and space. They gave me every opportunity to explore them as much as they could. But even after 13 years of speech therapy, I graduated without much self confidence. No one really cares if you win state-level computer competitions, or if you get third place nationally. Sure, winning was an accomplishment, but didn’t help much with day-to-day speaking. 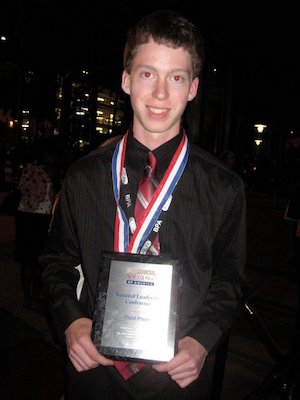 At a time when I felt so powerless, I turned to the only thing I could control: computers. Because other developers in the world openly published their work and findings online, I finally discovered a way to translate my thoughts into something tangible without the barriers of real life. I taught myself programming languages. I asked professors to complete assignments in Erlang or Scala.

Thanks to open source code and public forums sharing ideas, suggestions, bug fixes, and guides, I finally had an equalizer.

I was drowning for so many years in desperate need of a life raft, and instead, open source gave me a spaceship. In all honesty, I can’t fully articulate what the open source community did for me. It gave me a purpose. It gave me companionship. It quite literally set me free. It saved my life.

After learning to code, my school experience started to shift. As a highschooler, I gained a little confidence. My speaking improved with a couple close friends. I even picked up some freelance programming projects. Things continued to get better from there. In college, I got to reinvent myself. No one knew the person I used to be. Instead, I worked on creating a new, better version of myself.

That fresh start in college is when I flourished. My programming skills proved highly valuable, and I helped student organizations, student government, and the university build whatever they needed. In addition to going to school full time, I volunteered and even got a job running a website for the student government.

On top of all that, during my sophomore year, I also got an internship at a digital banking company called Banno. It’s strange; I never thought I’d end up in fintech. When you think of financial services, you picture stodgy suits, elite brief-case carrying businessmen, and ancient technology. Surprisingly, Banno was different. We were pushing all the boundaries we could. We had Silicon Valley-level talent surrounded by cornfields all building in a programming language no one had ever heard of. Our team members celebrated outsiders, and Banno was a bit of a rogue brand compared to others in the space. Because I always felt like an outcast growing up, it really made me feel like I belonged.

I continued working at Banno throughout school and after I graduated. For 6.5 years, I experienced what it was like to be a developer in the financial services industry. We were essentially building on top of outdated systems, and it wasn’t easy adding new tech on top of tech built before the internet. We were like carpenters building a house on top of wet, soggy dirt. No matter how much we tried to create a quality house, the legacy system foundation was never stable.

Over the years, I felt like I’d found my place in the working world. I loved working at Banno, which was acquired by Jack Henry, as well as doing other side projects. But then I started wondering about life outside of Des Moines. Even though I traveled with my family as a kid, I wanted to create my own path and follow my interests. So, I bought a cargo van, and built a bed frame with help from my friend Spencer. After I received a gas can from my other friend Eli, I began traveling the country. I visited Maine, Utah, Oregon, South Carolina, and so many more. Then something interesting happened. 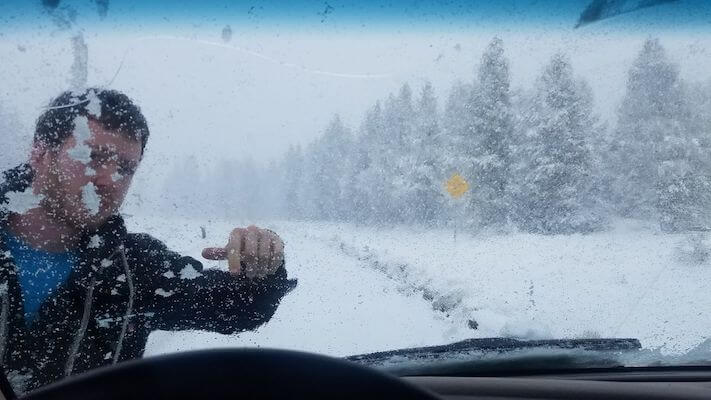 While passing through Colorado, Wade Arnold, my old boss at Banno, invited me to stay at his house. We talked a lot, like the deep conversations that only happen when you’re next to a campfire in the mountains. He told me about his audacious goal to create a way to move money unlike anything that exists in the market today. I’m not going to lie—it was a big goal that required a huge workload. 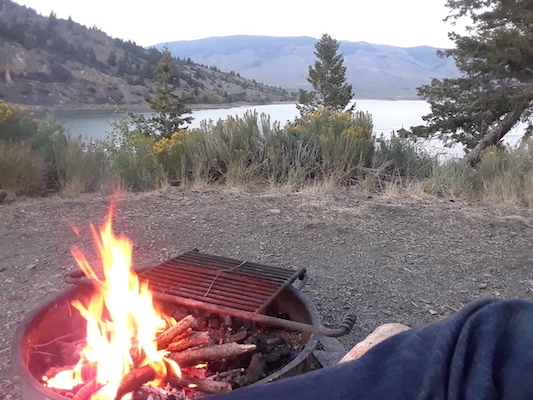 As we talked, we decided the biggest lift would be building the libraries necessary to move a payment. We dreamed up about how we’d do that differently than any other company. For starters, we knew we needed to build it out in the open. We also wanted to own the entire process down to the network; no third-party vendors. For those who aren’t in payments, this is the type of goal that makes people laugh at you or roll their eyes when you say it. It’s unheard of. No one has done it before.

Our second goal was to build a platform designed for all the creators and doers in the world currently hindered by the payments industry. As you can imagine, making our libraries open source meant the world to me. I know this sounds cheesy, but I truly believe open source has the power to change the world.

I believe open source makes the world better. When businesses are free to dream up big ideas, open source allows their developers to build even bigger.

As it stands, there’s very little information available to help businesses and developers move money through their products.

That’s when Wade offered me a once in a lifetime opportunity: to join him as the first employee in building Moov. He asked me—the kid who once thought he’d never be able to complete college or hold a real job. It meant the world to me to know that he trusted my skill set and knew how much open source meant to me. I gladly accepted the challenge and joined Moov as employee number one.

The first year working at Moov was like a research experiment to see how far we could get. We moved the libraries Wade had worked on to Moov’s Github. By revealing that source code and creating a home for ACH, it was like we had opened Pandora’s box. Suddenly hundreds of developers wanted to contribute. It wasn’t just a few nerds who were interested in open source; as it turns out, it was actually thousands. Even though I was new to Moov, it made me think back to when I first discovered free code and the satisfaction I felt building something better. What if we actually make the world better?

Fast forward three years later, and here I am, sitting at my computer writing a story about why I joined Moov. As I mentioned, I jumped at the chance to make open source a reality, especially in the normally closed and secretive financial services industry. Perhaps a more interesting topic from here is why I’ve stayed at Moov.

Even though working for a startup isn’t for everyone, it’s a place I’ve thrived. There’s something exciting about building every part of the business from scratch, especially when the leadership team encourages creativity and ingenuity. One of my favorite parts about being the first employee is watching new Moovers join the team and realize they’re entirely free to experiment, make recommendations, fix issues, and suggest changes. They always explain how they were blocked in their past roles and felt the frustrations of red tape, lack of trust, and outdated thinking. Just seeing the smiles on their faces when they start openly sharing ideas, or explaining new research they discovered, they’re so fulfilled. It’s really a good feeling. 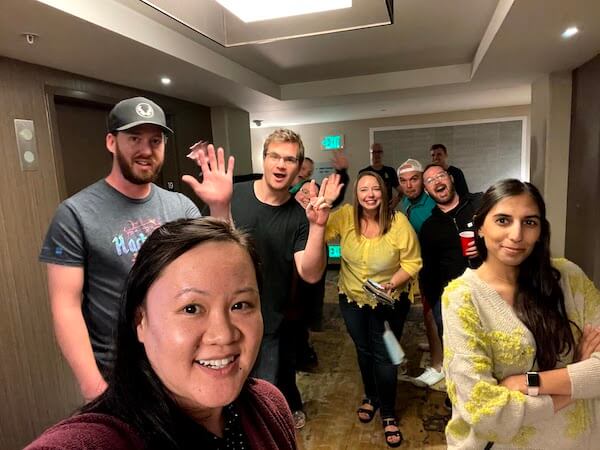 Over all, our people set us apart. We hire the type of people who are fueled by problem solving and progress. It’s why we don’t have to ask for permission or forgiveness because exploration is celebrated. I know all companies say this, but we genuinely have the most remarkable and talented team. Our leadership chose to put people over the business from day one. Because of that, we’ve made it a priority to find people who are excited to build the future.

Moov also embraced remote work pre-pandemic, and we’re building our company at such a unique time. Lots of Moovers are working remotely for the first time and they’re discovering a more productive and balanced life. We set their own schedules. We plan meetings that work best for us and our team. Our leadership team knows you can’t schedule creativity or plan inspiration. That’s why we’re free to work when we’re our best selves. And the Moovers who have worked remotely before seemed shocked that they’re not micromanaged or overworked.

As Moov continues to grow, I’m truly looking forward to the change we will make in the world. It may sound corny, but we’re already seeing it happen with customers. Right now, it’s never been easier to create a product or website, and it’s nearly impossible to add money movement to those things. Knowing that we’re going to make that a non-issue for businesses is such a game changer. Plus, we’re actually spreading our ethos of giving first across the payments industry through our open source community. People in other countries are using our open source code to stand up significant infrastructure they didn’t have before. It’s insanely rewarding to see how it’s improving lives.

If you’re interested in joining Moov, I’ll say this: bring your sense of adventure. You don’t have to know anything about payments or the financial industry. As long as you’re the type who wants to always learn and never settle. If you’re someone like me who’s struggled with disabilities, know that you’d have a safe place to be your complete self.

I know I’ve shared a lot, but I hope you understand how thankful I am to be here today. I honestly didn’t think I’d make it. I’ve found my dream life. It wasn’t easy, but I persevered and found a way. I didn’t let my stutter destroy me. Anyone else out there struggling with anything, just know that you are valued, wanted, and talented—even if you haven’t found your unique skills yet. You have something to contribute and your voice deserves to be heard. I hope my story inspires everyone to share who you are with the world.

These are the reasons I joined Moov—and you should too.