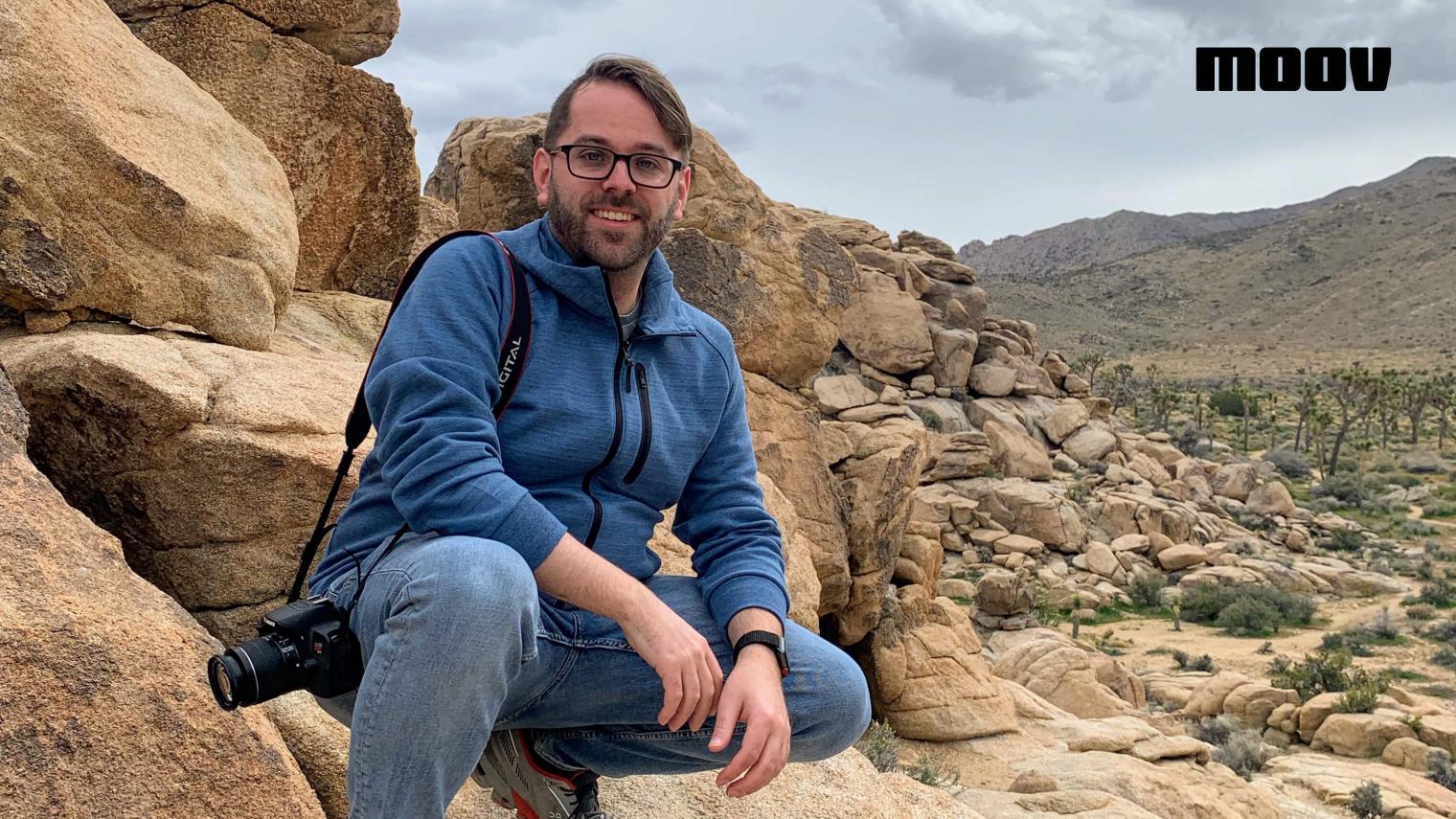 Why I joined Moov—Scott Wittrock

Be an architect—that was the result of my high school career aptitude test.

That short, generic quiz somehow felt so official, but it failed to teach me anything about myself. Maybe today’s career aptitude tests are more sophisticated, but back then, it gave me an endpoint out of thin air and I didn’t understand why it selected that career or if it was even the right path for me.

Instead, I decided to focus on finding my strengths. In college, I got a degree in mass communication and worked as a television producer. It was my first experience coordinating and supervising large-scale projects. Being a producer also meant stepping in and doing all the individual job roles across the set. While the complexity was a challenge for some, for me it was an absolute joy bringing a team together to deliver a premium show.

While I loved empowering teams and organizing shows, I realized I wanted to understand how my work impacted end users. So, I pivoted from media production to the event planning world, where I got to hone my operational and motivational skills. I thoroughly enjoyed the role, but one day, a product management position opened up on another team. At the time, I didn’t know what product management was, but it offered a chance to bring teams together, define a vision, remove roadblocks, and solve problems for real end users.

It was like all the other career paths I’d traveled somehow led to this destination.

So, I took a leap and landed my first role as a product manager and I never looked back. Since then, I’ve helped products move from rough ideas to launch in industries like computer vision, augmented reality, artificial intelligence, and financial services. Over the years, I’ve discovered a lot about myself through the products I helped launch, one of which was a snap-to-shop feature that landed in a major home improvement app.

Getting to help those developers build such a successful feature made me want to keep helping developers create their best work.

To do that, I realized I needed to be more than just a product manager. So, I decided to give back by teaching a development bootcamp at the University of Pennsylvania. There, I got to help students from all walks of life, like a truck driver pursuing programming while delivering cargo across the country. It was inspiring to help developers learn to code and transition careers.

But, it wasn’t enough for my entrepreneurial spirit. I decided I could use my skill set to help people turn their hobbies into a profitable business. So, I created a meal planning app to help food influencers offer subscriptions to their meal plans.

After building my meal planning platform, I was lucky enough to get accepted into a renowned incubator program, which guided business from inception to seed stage to Series A. I was excited to pursue my business as a side project while I kept exploring the world of payments as a product manager.

That’s when something unexpected happened: Moov suddenly appeared on my radar.

At that time, I had recently joined a financial services company on their open banking team. I had high hopes of, well, making open banking a reality. I quickly learned that the term “open banking” meant slapping an API on old systems. It was a bit of a letdown, and when I heard the approach Moov was taking, I wanted to learn more.

And just like that, it was like all the different intersections of my past converged and lined up with Moov’s ambitious course.

For starters, everyone at the company wants to help people. From end-users to developers to entrepreneurs, people need a better way to move money and add money movement into products. Because of the rise of the gig and creator economies, as well as the evolution of payments from e-commerce to platforms, both entrepreneurs and businesses want to build their business, not piecemeal a bunch of outdated systems to move money.

They also care about helping developers. Like, really care, to the point of building the entire business around open and transparent developer tooling. Historically, developers have to move mountains in order to integrate with banking systems. Not only is it a heavy lift that takes months, but the business must also be the right size and know the right people to make integrations possible. Moov is actually leveling the playing field for everyone looking to move money, it doesn’t matter if you’re a student in a bootcamp or a CTO at a well-known company.

By making money movement that simple and more accessible, it means Moov is helping people solve problems that can actually change people’s lives.

After finding out that Moov shared my vision of multiplying joy and dividing pain, I wanted to find out more about the people behind the Moovement. After talking with Wade, the founder and CEO, as well as other people on the engineer team, I was a bit surprised. It turns out, one of their early hires was a Chief People Officer because they prioritized building a strong culture from the beginning. The engineering team also prioritizes culture over execution, creating a forward-thinking space that’s transparent, open, collaborative, and empathetic. Plus, they give team members permission to speak up and help define all areas of the business, like company culture, internal processes, product direction, and more.

The company checked so many boxes for me, but I had worked at startups before and saw first-hand what happens when the investors and business leaders don’t see eye to eye. Having gone through the incubator program, I knew the steps for launching and running a successful startup, and Moov was a textbook example of how to do it right. On top of that, they were backed by Andreessen Horowitz, thought leaders of the payments space and arguably one of the most sought after venture capital firms. Having their support was like icing on the already giant cake.

I’m happy to say that I’ve worked with Moov for seven months and it continues to surprise me. With the level of talent across the organization all delivering on a mission we each fervently believe in means big things are on the horizon. We’ve already won the Visa Everywhere Initiative and we’re bringing together the best and brightest minds in fintech for the first-ever fintech developer conference this fall.

The world is starting to recognize that Moov is going somewhere, and I know we’re going to be around for a long time.

Looking back, I’m glad I didn’t follow my career aptitude test. Maybe I would have made a successful architect, but instead, I decided to find my strengths for myself. If you’re reading this and you’re still finding your groove, or you want a chance to expand your skill set, think about applying to Moov. We hire people who push boundaries and experiment, both in their roles and in how we deliver a premium developer experience. Regardless of your background or career path, if you care about helping people, perhaps this is the right destination for you.

These are the reasons I joined Moov—and you should too.